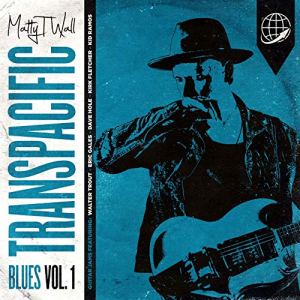 Matty T Wall is an Australian blues artist who has gained notoriety and commercial success in his native Australia. His third album, Transpacific Blues, finds him expanding his musical vision across the pond to the United States.

Anyone familiar with his first two releases will find his new album has a very different flavor, as it focus’ on a distinctly American style and sound. Vocalist/guitarist Wall fronts a basic rhythm section comprised of drummer Ric Whittle and bassist Stephen Walker, but now adds a guest artist on five of the eight tracks. In addition, it is an album of classic blues covers.

The five tracks featuring a guest have a fuller sound as he departs from his usual three person configuration with the addition of an additional instrument. The extra band member allows him to interact with another guitarist and he is able to add pauses into the mix.

Eric Gales adds a jazz touch to “Hi Heel Sneakers, while Walter Trout brings a dose of rock and roll to “She’s Into Something Good.” Fellow Australian David Hole is probably the best match as they combine on John Lee Hooker’s “Boom Boom.” Kid Ramos matches Wall note for note on “Quicksand.”

The songs where he is the sole guitarist travel in a different direction. “Stormy Monday” meanders along for a blues filled six minutes. Robert Johnson’s venerable “Crossroads bring the album to a fitting conclusion as Wall’s direct approach adds new textures to this classic tune.

Matty T Wall has added another building block to his career. His explorations of the roots of American blues allow him to move in different directions from his Australian beginnings. Transpacific Blues Volume 1 is an interesting album by a musician taking some chances as he broadens his horizons.