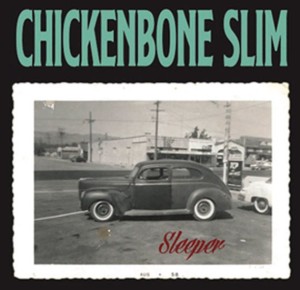 What’s in a nickname? A number of blues artists have had colorful nicknames down through the years. Larry Teves doesn’t look like a chickenbone and I’m not sure he is slim, but the man can play the blues.

His third release, titled Sleeper, of all original material is another album of excellent and technically adept modern-day electric blues. Both an accomplished vocalist and guitarist; he has now passed the 1000 performance mark.

His songs all have a unique quality and each tells a story both verbally and instrumentally. Backed by a veteran band, he calls on a number of guest artists; Laura Chavez, Joey Harris, Jerry Rainey, to help present his message and music.

Tracks such as “Vampire Baby,” “My Bad Luck,” “Strange Things Happen,” and “Strolling With Chickenbone” run the gamut from sublime to explosive to smooth-flowing.

Sleeper continues Chickenbone Slim’s progression as one of modern day’s blues better artists. It is an album worth exploring.