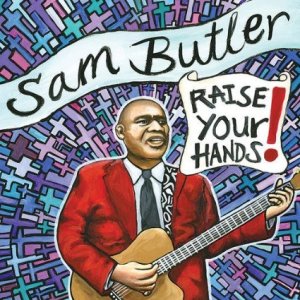 Sam Butler is the former rhythm guitarist/second vocalist for the legendary Blind Boys Of Alabama. Now on his own for the first time, he has issued his debut album, Raise Your Hands.”

Rooted in gospel traditions, he has stayed true to his heritage but with a unique and creative twist. He has taken songs by the likes of Bruce Springsteen, Eric Clapton, Van Morrison, Johnny Cash, and Tom Waits and moved them from their secular foundations to a bluesy gospel sound.

It is an eclectic group of songs that he molds into a cohesive whole. “Heaven’s Wall” (Bruce Springsteen), “The Lord” (Bee Gees), “Lead Me Father” (Johnny Cash), “Gospel Train” (Tom Waits), “Full Force Gale” (Van Morrison), and “Presence Of The Lord” (Eric Clapton) are a sampling of his creative process in action. His voice is very different from the original artists, which give the songs a very different feel.

Cash’s “Lead Me Father” undergoes a complete transformation and emerges as a bluesy Jimi Hendrix type rocker. “Full Force Gale” is now a gritty southern meeting house performance. The Old Impressions song, “Wherever You Leadeth” is a deep soul piece.

Sam Butler has taken gospel music in a very different direction and in doing so, expanded its parameters. Butler has issued a impressive debut album, which serves to whet the appetite for the next chapter.