Oscar Peterson, 1925-2007, was a legendary jazz pianist, who unlike many of his contemporaries focused on a melodic approach. His classical influences and technical ability allowed him to find commercial acceptance outside of jazz music.

The Singers unlimited were a jazz vocal group led by singer/producer Gene Puerling. His ability to combine their voices into a virtual choir was amazing given the technology of the early 1970’s.

Peterson’s strongest albums were usually recorded as a trio. Here he is accompanied by bassist Jiri Mraz and drummer Louis Hayes. What is different is he departs from the norm and records with a vocal group with the result being a collaborative effort released in 1971.

In Tune is a quiet and in many ways a subtle album. The flash is provided by the vocal harmonies but it is Peterson’s playing that provides the substance.

“Sesame Street” is the album opener where the two different styles of the trio and vocals come together and set the tone for what will follow. “Once Upon A Summertime” is a simple ballad with vocalist Bonnie Herman. “The Shadow Of Your Smile” finds Peterson knowing when not to intrude on the vocals but to act a supporting musician.

Oscar Peterson is recognized as one of the unique and great jazz pianists of the last half of the 20th century. Any of his Verve recordings is a must for the jazz aficionado. However, if you want something a little different from Peterson, In Tune is a good place to start. 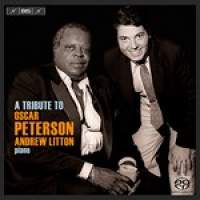 A Tribute To Oscar Peterson

Andrew Litton is known worldwide as a conductor. Her served as the conductor of the Dallas Symphony, (1994-2006), and will soon conclude a run as the principal conductor of the Bergin Philharmonic Orchestra in Norway. In 2015 he will assume the position of Music Director of the Colorado Symphony. He has been involved in over 100 recordings but none so unique as A Tribute To Oscar Peterson.

He grew up in a classical family but had an epiphany when he was given an Oscar Peterson record as a birthday present. He became a lifelong fan of his music and met Peterson on several occasions.

While he may be a conductor of note, he is also an expert pianist. He has now released a labor of love. He has released improvisations of some of Peterson’s classic performances, which span four decades of his career.

Litton has wisely kept it simple as he has eschewed any instrumental accompaniment. It is just him and his piano channeling the spirit of Oscar Peterson.

The music is well played and produced. Songs such as “Little Girl Blue,” “How Long has This Been Coming On,” “Things Ain’t What They Used To Be,” and “Lulu’s Back In Town” are resurrected as modern day pieces while paying tribute to the past. The only flaw of course is that Peterson’s originals are still available. Still, if you are a fan, this release will provide some listening enjoyment. After all, it is a label of love. 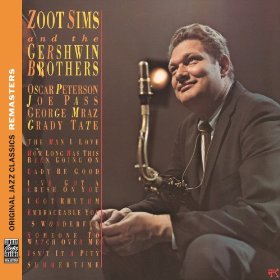 Zoot Sims And The Gershwin Brothers

Zoot Sims, 1925-1965, is sometimes an artist that slides under the modern radar but during his career he rarely, if ever, issued a bad album.

The saxophonist began his career as a member of a number of Big Bands during the 1940’s including Benny Goodman. During the 1950s and 1960s, he led his own quintet and was prolific in the studio and in concert. Perhaps his most accomplished album occurred with the Pablo label in 1975, when he was joined by pianist Oscar Peterson, guitarist Joe Pass, bassist George Mraz, and drummer Grady Tate to cover a number of Ira and George Gershwin tunes. Zoot Sims And The Gershwin Brothers has now been reissued as a part of the Original Jazz Classics Remasters Series.

The Gershwin Brothers compositions have been covered thousands of times but rarely so well collectively as in this release. Part of its allure is the accompaniment of Pass and Peterson who were among the giants of jazz music in their own right.

If you want an introduction to the sound of Zoot Sims, just listen to the opening of “How Long Has This Been Going On.” He follows the Gershwin’s melody note for note with only Pass’s guitar is support, yet the song takes on the unique quality that only he could produce.

“The Man I Love” was written in 1928 and Sims gives it an up-tempo swinging interpretation that would have been comfortable in the Big Band era. “I Got Rhythm” is entended out to past seven minutes, which allows for a number of solos but the high light is the interaction between Peterson and Sims. “Embraceable You” has a tone that set the standard for just about every jazz saxophonist who would follow. Add in such standards as “Summertime,” “Isn’t It A Pity,” “They Can’t Take That Away From Me,” and “I’ve Got A Crush On You” and you have a nice journey through an important part of the Gershwin songbook.

There are three bonus tracks including a more laid back version of “I’ve Got A Crush On You” than that which appeared on the original album.

Sims has a unique style that could honk and purr as needed. He had the ability to take a tune and change it at will, yet retain much of its original essence.

Zoot Sims And The Gershwin Brothers is not only a fine introduction to the music of Zoot Sims but remains one of the better jazz albums of its era.

Oscar Peterson was a giant of jazz. From the late 1940’s until his death in 2007, he produced a body of work that was not only of the highest quality due its improvisational nature but very approachable as he was more melodic than many of his contemporaries.

Stephane Grappelli’s first claim to fame came during the 1930’s when he was part of a quintet with legendary guitarist Django Reinhardt. He blended classical elements into his music as he paved the way for the violin to be recognized as a jazz instrument.

On July 6, 1979, pianist Peterson and violinist Grappelli took the stage at the Trivoli Gardens in Copenhagen, Denmark and the tape was running. They were joined by guitarist Joe Pass, bassist Niels-Henning Orsted Pederson, and drummer Mickey Rokey. The results of the concert have now been re-released as a part of the ongoing Original Jazz Classics Remasters Series.  Skol has been enhanced with three previously unreleased bonus tracks.

One should be aware that the concert had two distinct parts. The first half featured Grappelli, Pass, and Pederson, while the second half added Peterson and Roker to the mix.

While all the musicians step forward to solo from time to time, it is Grappelli who is the star of the show.

The best track is a poignant rendition of Django Reinhardt’s “Nuages” with Peterson’s laid back solo followed by incredible work by Grappelli. “Skol Blues” is a rare jazz statement where a pianist and violinist play off of each other. “Makin’ Whoopee,” “Someone To Watch Over Me,” and “That’s All,” are vehicles for each instrumentalist to solo as Grappelli ties everything together.

The three bonus tracks from the concert are seeing the light of day for the first time. Duke Ellington’s “Solitude” has Peterson in the middle and Grappelli finishing. There is a laid back version of Fats Waller’s “Honeysuckle Rose.” In some ways it is guitarist Joe Pass who is the glue on many of the songs and nowhere is this more apparent then on “I Got Rhythm” where he not only provides a foundation but on his solo adds some bars from “Salt Peanuts.”

As with all the releases in the series the production and sound quality are impeccable. The enclosed booklet gives a nice overview of the concert and music.

Thirty-four years have passed since these artists took the stage together, yet the music retains its sheen. A must release for any jazz aficionado.