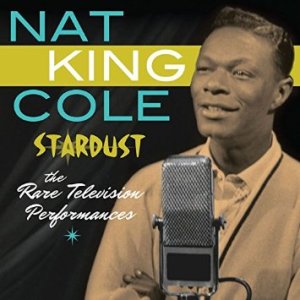 Nat King Cole, 1919-1965, had two distinct phases to his career. During the 1940’s and early 1950’s he was recognized as one of the leading light jazz pianists in America. His Nat King Cole Trio was one of the more successful small groups of its era. The last part of his career found him as a crooner, who was one the first Afro-American artists to cross-over into a white audience mainstream acceptance.

During late 1956 The Nat King Cole Show debuted on NBC, first as a 15 minute show and then for a half hour. During its existence, it not only featured many of the leading stars of the day but found Cole singing a number of songs that would not appear in his recordings. Real Gone Music has now resurrected 26 of Cole’s performances from the show. While it is amazing that these performances actually exist as TV networks at the time destroyed of taped over many programs; the sound quality is subject to the technology of the day so enjoy but beware.

Cole was not a part of the rock and roll generation. Had he lived, he would have settled in Las Vegas and played the club circuit. His baritone voice had a laid back and smooth quality that appealed to an adult audiance. The vocal albums issued during his lifetime were all similar in style and approach but live he took liberties interpreting the songs.

There is a jazzy performance of “Sweet Lorraine” with Oscar Peterson on piano. “Life is Just A Bowl Of Cherries” and “Rosetta” find him sharing the stage with Billy Eckstine. “Beer Barrel Polka (Roll Out The Barrel)” finds him twisting the melody all out of shape. Songs such as “Button Up Your Overcoat,” “April Love,” “A Blossom Fell,” “The Nearness Of You,” and “St. Louis Blues” are all vehicles for Cole to ply his craft.

The second disc of the release has a bonus for Nat king Cole fans. During February of 1963 he appeared on an episode of the Australian Television Show Mobil Limb. Host Bobby Limb had no other guests that night but rather turned the entire episode over to Cole who proceeded to give a nine song mini-concert. That concert fills out this release.

It is a presentation of primarily well-known songs. “The Way You Look Tonight,” “Mona Lisa,” “When I Fall In Love,” and “Ramblin’ Rose” were a part of his live act for years. “Dear Lonely Hears” finds Cole at the piano and he takes it from easy listening pop to funky jazz. It makes one wish he would have played the piano more during this phase of his career as his connection to the music was different than just being the vocalist.

Stardust The Rare Television Performances is a release aimed at Nat King Cole fans and people invested in the pre-rock and roll era. The word rare is bandied about quite a bit but here it rings true.