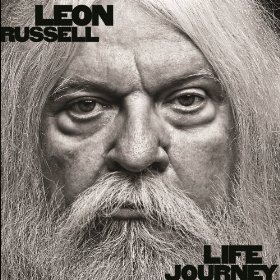 Leon Russell is now a full-fledged member of The Rock And Roll Hall Of Fame. It was a fitting reward for a lifetime of good music and a lot of time on the road and in the studio. At the age of 72 he has returned with a new studio album with the fitting title, Life Journey.

The ten cover songs and two originals can be considered a soundtrack to his life. “Georgia On My Mind” and “That Lucky Old Sun” have a beauty to them as his weary voice tells their stories. The old classic “Fever” would seem to be an odd choice for Russell but he purrs his way through the old standard.

Billy Joel’s “New York State Of Mind” would seem to be another odd choice but he transfers this pop standard to his own brand of New Orleans gumbo. The album opening “Come On In My Kitchen” is a solid blues number.

The two original tunes, “Big Lips” and “Down In Dixieland” are Leon Russell to the core. He is at heart a New Orleans based artist and these songs explore the rhythms and textures of his lifetime in music.

He has intimated that this may be his last studio album. It that is indeed the case, he has finished his studio journey in style.