There was a time when John Fogerty refused to perform Creedence Clearwater music. That changed with the passage of time and his latest album, 50 Year Trip: Live At Red Rocks is a live, in concert celebration of his 50 year musical journey and is filled with primarily the best of Creedence Clearwater, plus a few solo songs.

If there is ever a criticism of John Fogerty, be it in the studio or live in concert, it is he is too perfect. His live performances tend to mirror his studio tracks, note for note and vocal for vocal. He follows that formula on this album as he travels through a 19 song set that contains some of the best rock and pop music of the past 50 years. But it could have been a lot more.

John Fogerty and Creedence Clearwater have always been all about the music. From “Born On The Bayou” and “Green River” to the concert ending “Fortunate Son,” “Bad Moon Rising,” and “Proud Mary,” the music just flows from one song to the next. Add in such songs as “Looking Out My Back Door,” “Down On The Corner,” “Who’ll Stop The Rain,” and “Centerfield” and you have the perfect John Fogerty/Creedence concert.

The CD does not present the whole concert. What is missing are a number of 1960’s covers including The Beatles “With A Little Help From My Friends,” The Who’s “My Generation,” John Lennon’s “Give Peace A Chance,” And Sly & The Family Stone’s “Dance To The Music” and “Everyday People.” The inclusion of this material would have made the CD a lot more interesting and ultimately better. There is a film of the concert being released that contains the entire performance.

50 Year Trip: Live At Red Rocks is a basic John Fogerty primer. It is what it is and a good place to enjoy his music. The negative part of the release is what was excluded and that makes all the difference. 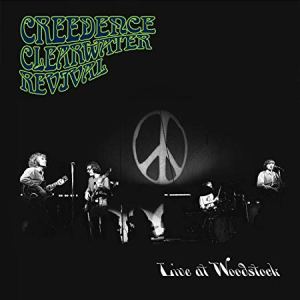 John Fogerty disliked, or more appropriately hated, Creedence Clearwater Revival’s performance at Woodstock. No songs were included on the famous Woodstock album or in the subsequent movie. A few songs have surfaced during the last half century, but for the most part they have remained unreleased; until now.

Live At Woodstock presents the entire Creedence Clearwater Revival performance at the famous festival. I can only think of two other officially released live Creedence concerts; Live In Europe and The Concert and Live At Woodstock is superior to both. It is the complete concert and has a very live feel and unless some other concert material is found and released; this is their definitive concert statement.

Creedence was three albums into their career at the time, so this concert contains a lot of material that was later eliminated from their live shows as their future hits mounted up.

The concert concluded with “Keep On Chooglin'” and “Susie Q.” The two songs stretch out to 22 minutes of music. As their career progressed they became known for re-creating their studio releases. Here, there is a lot of improvisation and the band stretches and explores territory that they rarely visited.

“Bad Moon Rising” and “Proud Mary” are competent performances but an extended “Commotion” is a gritty affair, while “Bootleg” has a rare high energy from John Fogerty and band. Add in “Ninety Nine And A Half Won’t Do” and a cover of “The Night Time Is The Right Time” add up to both an interesting and well performed concert.

The sound may not be up to 21st century standards but for 1969 is very good. The two Fogerty brothers guitars are both distinct and layered on top of the rhythm foundation. The sound may lapse at times, but overall the album provides an enjoyable listening experience.

Sings John Fogerty/Change In The Weather

Janiva Magness has built her reputation as an excellent rock and blues vocalist who mainly sings her own material. So it was a bit of a surprise to find that her new album is one of all cover songs. She did not travel far and wide to collect her material but rather picked 12 compositions by John Fogerty.

The songs of Sings John Fogerty/Change In The Weather were chosen wisely. The well-known hit songs intertwine with lesser known material. The songs chosen also take on new depth and meanings due to a female being the lead singer.

Magness has always been an interpreter of songs, whether the words are hers or that of someone else. “Lodi” is a song that just makes you smile. Her version is smoother that Creedence’s version. Sam Morrow’s added vocals are a nice touch. “Bad Moon Rising” is a little less ominous than the original as here it is just a very good rock & roll song. “Have You Ever Seen The Rain” is a poignant take that is very modern despite its age. “Fortunate Son” is still a searing protest song, this time with a woman as the lead.

“Someday Never Comes” has tempo changes, intense vocals, and a message of generational failure. “A Hundred And Ten In The Shade” proves once again that simple is best and in this case beautiful. “Blue Boy” is a joyous romp, while “Lookin’ Out My Back Door” is an album ending, live in the studio, jam session.

Sings John Fogerty/Change In The Weather is an imaginative and ultimately good stop in Janiva Magness’s musical journey. She has issued an album of music worth hearing.

Creedence Clearwater, John Fogerty, Wrote A Song For Everyone

Wrote A Song For Everyone

I have to admit that I am not the biggest fan of duet albums. Some are recorded because an artists career is in commercial decline and others because there is a lack of new creativity. Happily that doe not seem to be the case for John Fogerty.

When putting together a duet album, John Fogerty has one thing going for him that most artists do not, and that is a catalogue of some of the best songs in music history. The Hall Of Fame career of Creedence Clearwater is built upon his compositions.

He has wisely chosen vocal partners who take most of the songs in different directions.

A number of the tracks have a decidedly country bent. “Almost Saturday Night” with Keith Urban replaces much of the lead guitar sound with a banjo. His union on “Hot Rod Heart” with Brad Paisley is a nice chugging road song. Alan Jackson helps to move “Have You Ever Seen The Rain” out of a rock format. The title track benefits from the female voice of Miranda Lambert and guitar of Tom Morello. “Bad Moon Rising” with The Zac Brown Band emerges as a peppy old fashioned hootenanny performance.

There are a number of songs that retain their rock and roll roots. “Fortunate Son” is a song that has always had an edge to it but The Foo Fighters help to make it downright nasty. Bob Seger’s voice may not be as strong as it once was but they manage to make “Who’ll Stop The Rain” authentic. The best track may be the somewhat obscure “Someday Never Comes” with Dawes who help it achieve a rare beauty.

The album contains two new solo tracks. “Mystic Highway” comes close to some of his classic material as it is a melodic pop/rocker. “Train Of Fools” is close to it in quality and is a straight ahead rocker.

Yes, there are a couple of misses. “Born On The Bayou” with Kid Rock is just to vocally quirky. Jennifer Hudson gives a fine performance on “Bad Moon Rising” but it is a rock song and her gospel leanings are difficult to take.

All in all, John Fogerty has issued both an entertaining and an interesting album of music and that is a difficult combination to beat.

During the past 40 years or so, the material of Creedence Clearwater has been released in just about every form, format, and configuration possible but the 6-CD box set titled Creedence Clearwater Revival may be the best of them all. Originally issued in 2001, it now makes its well deserved return.

Everything Creedence recorded for the Fantasy label is here. Their seven studio and two live albums are presented in chronological order. Hits such as “Down On The Corner,” “Proud Mary,” “Bad Moon Rising,” “Travelin’ Band,” “Up Around The Bend,” “Lookin’ Out My Back Door,” and more, were single releases that helped define their era and remain fresh four decades later. Interspersed among the hit songs is the rest of their album material, which is many times underrated as all of their studio albums contained very little filler.

The live material, which fills about a disc and a half have been released a number of times. While they present a good picture of Creedence on stage, I have always preferred their studio material.

The highlight of the set is the first disc, which contains pre-Creedence material, 1961-1967. Four tracks by Tom Fogerty & The Blue Velvets lead off the disc and the pre-Creedence Clearwater journey. “Come On Baby,” “Oh My Love,” “Have You Ever Been Lonely,” and “Bonita” are raw and not up to their later standards but are a nice glimpse of a band that is beginning to develop. My only complaint is that the songs from their third single, “Yes You Did/Now You’re Not Mine,” are not included and as there are probably the rarest, they are missed.

All 21 tracks by the Golliwogs are also included. If you want everything by the band, these songs are essential but be aware that there are not as commercially viable as what would soon follow.

One problem with this new release is that the sound, while acceptable, is not consistent. This is most apparent on the live tracks. On the other hand, the 75 page booklet gives an excellent history of the band and their music.

Creedence Clearwater Revival allows one to follow the band from its earliest beginnings until its demise. If you do not own much of their material or want to fill in some gaps in your collection then this is a release for you. American rock and roll does not get much better than Creedence Clearwater.