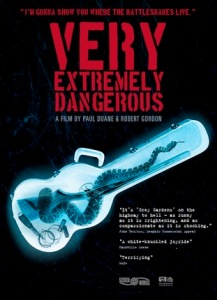 Jerry McGill may seem like an odd choice for a documentary but film makers Paul Duane and Robert Gordon chose him in all his seedy glory to be the focus of their movie.

Merle Haggard, Willie Nelson, and Waylon Jennings were some of the stars of the outlaw movement in country music but McGill was the original outlaw. He was a rockabilly singer who cut one single for the legendary Sun label in 1959. “Lovestruck/I Wanna Make Sweet Love” received little attention and McGill went on to live the life of a bank robber, con artist, burglar, and drug addict who was wanted by the FBI. He spent nearly two decades playing rhythm guitar in Waylon Jennings band under the assumed name Curtis Buck.

Not all musicians are stars or leave a lasting legacy. The film looks back on the life of a dying Jerry McGill, who was unrepentant to the very end. McGill passed away shortly after the film’s completion. There are no apologies for his life. The only redemptive aspect of the film is the music, which provides a center and back drop for McGill’s life. While the film may not have that big budget aura and smoothness; it is mesmerizing due to the seediness of his life against the background of the American music landscape.

The lost album probably is not an apt description for his included music. While the music has been lost for the most part; it is a compilation from several sources and recording sessions. The combination of original compositions and covers extend from his Sun single of the late 1950’s to Mickey Newbury’s “Why You Been Gone So Long,” Guy Clark’s “Desperados Looking For A Train,” and his own 1973 composition with the apt title “Hootchie Kootchie Man.” He has a solid rockabilly and country style and if you can disassociate the content of the film from the music; it is a solid listen.

The music from the soundtrack works better within the context of the movie than it does as an individual release. It tends to recede into the background of the movie at times and is best listened to within that context.

Jerry McGill is not a sympathetic person, even during his last days. The fact that he was a part of the American music scene is his saving grace. Very Extremely Dangerous seems more of a labor rather than a labor of love but it is always interesting in a morbid sort of way.