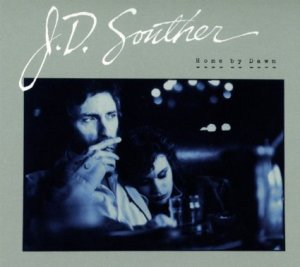 Home By Dawn was J.D.  Souther’s fourth studio album and his only studio release between 1979 and 2008. It was an album of Americana pop meeting country rockabilly that fused two different styles into a creative mix. It was a commercial failure and a creative triumph. It may not be Souther’s most cohesive work but it is his most unique and entertaining.

The title track has rockabilly influences and is a style that one wishes he could have explored more fully. Incorporating rock and country, he gives it an energy that enables him to escape the laid back nature that permeates much of his work.

Treading the line between styles is a number of poignant pieces. “All For You,” and “Bad News Travels Fast,” are smooth and polished with incisive lyrics. “Say You Will” has a 1950’s flavor and the vocal duet with Linda Ronstadt is heartfelt.

The Dixie Chicks covered “I’ll Take Care Of You” 14 years later on their 12 million selling Open Spaces album. Two versions of the song appear on this release. Souther’s finished and laid back version plus a bonus track that presents the song as a raw demo allows one to follow the evolution of his creative process and where one of his songs ended up in a more famous cover.

The best of the bonus tracks is another duet with Linda Ronstadt. “Hearts Against The Wind” was originally issued on the Urban Cowboy film soundtrack and its county leanings make it a good fit with the rest of the material.

Home By Dawn remains an interesting stop in Souther’s musical journey. It was a return to his country roots. His attempt at creating a rockabilly release was moved a little off kilter by his pop sensibilities. Still the results were excellent.