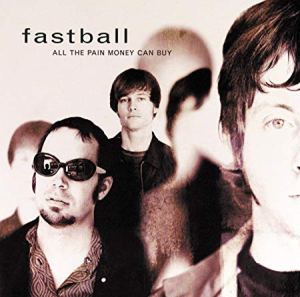 All The Pain Money Can Buy (20th Anniversary Edition)

Tony Scalzo, Miles Zuniga, and Joey Sheffield formed the band Fastball during the mid 1990’s. Their first album, Make Your Mama Proud, sold a robust 6500 copies and quickly disappeared from public consciousness. So it came as a surprise when their second release, All The Pain Money Can Buy, sold over one million copies during the first six months after its release.

The thee members of Fastball have continued to record but All The Pain Money Can Buy remains their musical magnum opus. A 20th anniversary album has now been released complete with nine bonus tracks.

Fastball has never been able to repeat their commercial nadir but this reissue is a reminder of just how good a band Fastball was at its peak. They combined memorable melodies, precise lyrics, and an energy that was the epidemy of the late 20th century indie rock movement.

The hit single “The Way,” plus mainstream tunes “Fire Escape” and “Out Of My Head” remain solid pieces of rock and roll.

The bonus tracks are highlighted by four previously unreleased demos and an acoustic version of “The Way.” They even manage to produce a credible cover of Herb Alpert’s “This Guy’s In Love With You.”

Fastball is a basic three piece band who fill in their sound with catchy tunes and emotional bravado.

Fastball is a modern band celebrating a 20 year milestone. The band remains relevant but All The Pain Money Can Buy represents their creative and commercial peak. If you missed them and this album the first time around; this reissue is an excellent second chance.