Eric Bibb’s career has been one of exploration, creativity, and change. His early career found him as a gentle folk singer emulating Greenwich Village folk singers such as Pete Seeger, Bob Dylan, and Odetta. As time passed he began fusing blues into his folk music. His latest album finds him returning to his cultural roots as he has added West African rhythms to his sound.

His latest release, Global Griot, continues his musical metamorphosis by exploring and adapting some of West Africa’s culture and stories into his music. The word griot is an African word for a member of a caste who is responsible for maintaining an oral record  of tribal history through music, poetry, and storytelling. He expands this concept as he moves his music outward into the world around him.

Global Griot is a career defining statement and his most distictive and powerful to date. It is also his most ambitious as it contains 24 songs spread over two discs.

Sometimes his approach belies the social commentary as “We Don’t Care,” “What’s He Gonna Say Today,” “Race And Equality,” and “Where’s The Money At” tackle a number of social and polical issues.

Bibb has always had a spiritual presence in his music and here songs such as “Let God,” “Listen For The Spirit,” and a simple “Michael, Row Da Boat Ashore” provide a nice counterpoint to the other material as they as interspersed throughout the album.

Anyone acquainted with the music of Eric Bibb will find Global Griot full of surprises, yet never straying too far from the familiar. Several decades in his career, he may have produced his most accomplished album of music. 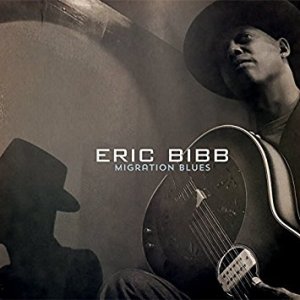 Eric Bibb has recently produced a series of excellent and relevant albums highlighted by 2014’s Blues People. He has a laid back and simple approach that often belies the messages of his music.

His latest release, titled Migration Blues, is centered around a fusion of past and present migrants or migrations that are explored within a folk and blues format. The 15 tracks include 12 original tunes and three cover songs. Bibb (vocals, acoustic guitar, and banjo) is joined primarily by JJ Milteau (harmonica) and Michael Jerome Browne (guitar, banjo, and mandolin).

Keying off the Southern American migration of Afro-Americans from the rural south to the industrial north due to segregation and poverty, he moves his music to present-day reasons for escaping various home countries. “Refugee Moan,” “Four Years No Rain,” “We Had To Move,” and “With A Dolla In My Pocket” focus on the effects of war, prejudice, and starvation in their home countries and the hopes and realities of their new homes. Particularly chilling is “Prayin’ For Shore,” which presents the dangers at sea and of their destination as well.

The Three cover songs are a laid-back version of Bob Dylan’s “Masters Of War,” a hopeful interpretation of Woody Guthrie’s classic “This Land Is Your Land,” and a moving version of the spiritual “Mornin’” Train” that ends the album.

Despite the seriousness of the topics, Bibb’s voice and music make it all very listenable. Milteau’s Harmonica is an important component to the sound on many of the songs as it provides a nice counterpoint to Bibb’s guitar work.

Eric Bibb has paid homage to the American blues through his stories and music. Migration Blues is an album that deserves a listen.

Eric Bibb, The Happiest Man In The World

The Happiest Man In The World

I don’t know if Eric Bibb is the hardest working person in show business but he has to be one of the most prolific, Whether alone or with a wide assortment of friends, he releases albums with regularity.

The Happiest Man In The World finds Bibb combining his talents with the Finnnish group North Country Far and English jazz/folk bassist Danny Thompson. His music tends to tread the line between blues and folk. While most of his albums tend to be more blues oriented, this times he comes down more on the folk side of the equation.

Bibb wrote of co-wrote 11 of the 14 tracks. My only criticism is the set could have used a little bite in places but his wonderfully soulful voice carries the day. His acoustical approach to such songs as “Tell Ol’ Bill,” “Prison Of Time,” “Toolin’ Down The Road,” “Wish I Could Hold You,” and “Creole Café” are smooth and laid back. His cover of the Kinks classic rocker “You Really Got Me” is unique as it opens up new textures as he re-invents the song.

One thing that remains consistent in most of Bibb’s work is the positive nature of his music. In a world that is many time bleak, he tends to explore the sunny side of life.

The Happiest Man In The World is a consistent album that will mke you smile and relax and sometimes that is enough.

The music of Eric Bibb can be defined as acoustic blues, Americana, folk or more appropriately a fusion of all three. The music is gentle but  the lyrics many times have an edge and carry a message.

He has just released his newest album titled Blues Power. It is a combination of original compositions and carefully selected covers. They all fit into his theme of exploring the history of African Americans, which all adds up to his most cohesive effort to date.

His own co-written compositions such as “Driftin’ Door To Door,” “God’s Mojo,” “Rosewood,” and “Dream Catchers” keep the focus on his thoughts and stories.

His cover of the Reverend Gary Davis’ “I Heard The Angels Singing” is both subtle and soaring thanks to The Blind Boys Of Alabama. The vocal group re-appears on the traditional “Needed Time,” which also includes vocals by Taj Mahal and Ruthie Foster.

Eric Bibb has created a minor masterpiece as he explores elements of his and America’s heritage. Blues People is a thoughtful and entertaining release, which is a combination that is rarely attained.

Bibb is a blues singer/songwriter who incorporates some African rhythms into his traditional brand of American blues. Much of his work has had a somewhat simple and even stark sound at times. On his newest release, however, he has filled in the sound with a band and even horns in places. Through it all he remains an excellent story teller who travels in a gentle direction.

He has often added spiritual elements to his music. The title of the album is taken from the road that connects Jerusalem and Jericho where the Biblical story of the Good Samaritan took place.

All of the songs were written or co-written by Bibb and he has a knack of producing incisive lyrics. While songs such as “Freedom Train,” “The Lord’s Work,” and “With My Maker I Am One” are suited for his laid back brand of folk and blues; they can also be translated in other musical styles and directions as well.

“Death Row Blues” and “One Day At A Time” tell wonderful stories and present the more traditional blues side of his music.

Eric Bibb has been producing excellent music for decades and his Jericho Road is the latest in his chain of releases. He continues to combine American and African elements into his music, which allows him to create a unique brand of blues that can move in a folk direction at times. It is an album that is well worth a listen.