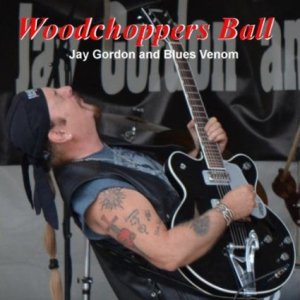 When Your backing band is named Blues Venom; it gives a not to subtle hint at what your musical approach is all about.

Simply put, Jay Gordon is an in-your-face electric blues guitarist and vocalist who takes no prisoners. He will shortly release Woodchoppers Ball, which combine six new tracks and a half-dozen taken from past releases. It all adds up to a raw, energetic, and passionate blast of sound that will blow the top off your speakers if you are not careful.

Gordon has always been able to create his own songs but here he covers several blues classics, which puts the emphasis squarely on technical expertise as a guitarist. Robert Johnson’s “Travelin’ Riverside Blues,” Koko Taylor’s “Hobo Hilton,” and  Elmore James’ “Stranger Blues” are powerful modern day interpretations of the blues at its roots.

When you add his own explosive songs such as ‘Chainsaw Boogie,” “Pure Grain Alcohol,”and “Original Sin” to the mix, you have the blues in attack mode.

Backed by bassist and sometime vocalist Sharon Butcher, keyboardist Rich Wenzel, and drummers Rich Gordon Lambert and Ric Daily, he is able to build on their tight foundation and through his skill at improvisation, is able to visit places where few guitarists are able to go.

If you want to get your blood flowing and your adrenalin rushing, this is an album for you…but it is not for the weak of heart.