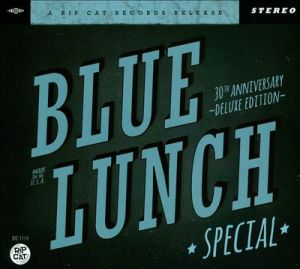 I have written several times that I have never come across a bad album on the Rip Cat label and Special: 30th Anniversary Edition by Blue Lunch keeps that streak intact.

Blue Lunch is an ultimate bar band that made good. They have been plying their craft on the road and in the recording studio for close to three decades. Their newest release is a compilation of 16 tracks that celebrates the best of their career.

They are a large band consisting of two saxophones, trumpet, keyboards, bass, guitars, drums and harp. There have been personal changes but vocalist/harp player Pete London, guitarist/vocalist Bob Frank, bassist Raymond Deforest, and trumpet player Mike Rubin appear on all the tracks.

As with many bands that have been on the road for years they are adept at playing various types and styles of songs.

The First track, “Sideswiped,” is an instrumental and is a good introduction to some of the various members of the band. It is a guitar based track with some tasty sax solos thrown in for good measure. “Cold Day Down Below” brings Mike Sands piano to the forefront with a traditional rhythm section of bass and drums in support. If there is one thing the band has learned to do, it is harmonize and they are up-front on many of the vocal tracks.

“Skin Bones And Hair” has a big band feel with blasts of brass. “Cuttin’ Out” has a jazzy improvisational sound and could also be called jump blues.

Blue Lunch is a band that seems to be having a good time and they invite the listener along for the ride. Their often tongue in cheek lyrics and thei aggressive style just blast out of the speakers.

Special: 30th Anniversary Deluxe Edition is a good introduction to their music and will hopefully bring them some deserved mainstream success.