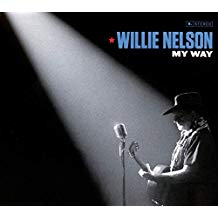 Nelson’s new album, as the title suggests, is an album of songs made famous by Frank Sinatra. He is one of the few living artists who could even attempt an album of this type as Sinatra made just about any song his own and his versions are considered definitive.

Nelson is an iconic country artist but has moved in a pop and easy listening direction on a number of occasions. His voice may not be as strong as in the past but it has acquired a nice patina. He brings a weariness and nostalgia to the songs as opposed to Sinatra’s smoothness.

Nelson has always had impeccable phrasing and that serves him well on covers such as the title song, “It Was A Very Good Year,” “Summer Wind,” and “Fly Me To The Moon.”

Possibly the best track is “One For My Baby (And One For The Road), which is closer to the original. The most interesting track is a duet with Norah Jones on ‘What Is This Thing Called Love,” which gives it a different spin.

This is not country Willie; this is the Great American Songbook Willie. Sinatra’s originals are always worth a listen but Nelson does a credible job providing a different take on many of these classic tunes.