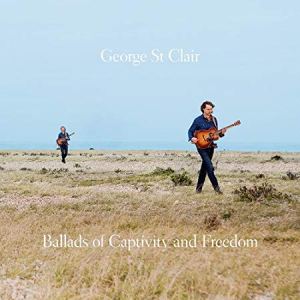 Ballads Of Captivity And Freedom

Somewhere Marty Robbins is smiling. Over a half-century ago he released a series of country and western Gunfighter albums that told stories of the old west. They became commercially successful on the pop charts and were some of the first albums to expand the boundaries of country music and take it into the mainstream.

George St. Clair carries on that tradition in a modern sense. His reflections and philosophy about the American west have now come to music with his album Ballads Of Captivity And Freedom. His talents as a story teller and balladeer have merged into an album of images and perceptions set to music.

His is a simple approach. He is a standup acoustic guitarist and vocalist, who is accompanied by another instrument here and there. The melodies are simple, which keep the focus on his thoughts and stories.

“The Places Where They Prayed,” “New Mexico,” “Autumn 1889,” “Pedro  Paramo,” and “Up To Fail” range from the grasslands of the west to the personalities who inhabited them. Stories of love, failure, redemption, and love dominate his themes.

Ballads Of Captivity And Freedom is one of those albums that you experience as well as listen too. It is music that reaches back in time and takes you along for the ride.