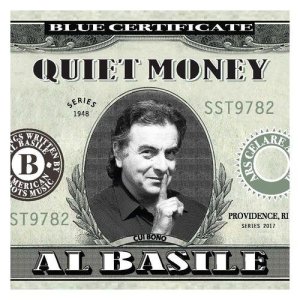 Over four decades ago Al Basile was the trumpet player for the Rhode Island jump-blues band Roomful Of Blues. These days, he surfaces every so often with a new solo album. He has explored a number of styles and rhythms but Quiet Money comes close to the classic sound of Roomful Of Blues.

He brings along many of his usual cast of characters. Former bandmate, producer, and brilliant guitarist Duke Robillard is on board as are former buddies from Roomful Of Blues, plus an assortment of musicians from Robillard’s current band.

In addition to being a superb trumpet and cornet player, it is his ability as a songwriter that pushes his music beyond the norm. He is a poet who regales the listener with thoughtful and incisive stories set to melodic blues music.

When you get to a certain age, your thoughts and approach to life begin to change. “Not Today” and “Who’s Gonna Close My Eyes” explore the passage of time. “Put Some Salt On It” is a humorous take of classic blues with hidden meanings lurking in the lyrics.

Quiet Money is an excellent dollop of modern-day blues from a sometimes unappreciated master. 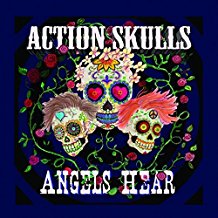 There are super groups and then there are sort-of super groups. John Cowsill of the 1960’s pop group the Cowsills, Vicki Peterson of the Bangles, and Bill Mumy,  producer, singer, and child actor of Lost In Space “Danger Will Robinson Danger,” have combined their talents to produce the album Angels Hear by their newly formed group, Action Skulls.

While the music is modern sounding, in many ways it contains a retro approach harping back to the 1970’s California and west coast sound. They basically produce shiny pop music that travels in a number of directions. There is the up tempo toe-tapper, “The Luckiest Man Alive,” a maudlin “I’ll See You In Another World,” the acoustic “Map Of The World,” and the bluesy “Feed My Hungry Heart.”

The harmonies are not only well-crafted but interesting. Their voices are very different but they blend together well. Whether the style is laid back or energetic, the harmonies which can be subtle or soaring and remain the foundation of their sound.

Angels Hear was about four years in the making. Eight songs were recorded, when original member, bassist Rick Rosas passed away. That loss and their own schedules put everything on hold for several years. Whether the Action Skulls ever record another album remains to be seen; but Angels Hair is an excellent album of well-crafted pop that proves musicians from different backgrounds can create very listenable music together.

On The Way Downtown: Recorded Live On Folkscene

For the last four-plus decades, Peter Case has been an “everyman” of American music. He has recorded in a number of styles including punk with the Nerves, new wave with the Plimsouls, plus as a solo artist with some straight rock & roll, blues, folk rock, and solo acoustic performances.

His newest release reaches back 20 years. During 1998 and 2000, he twice appeared live on the KPFK-FM syndicated radio program. The 18 live tracks from those performances have been resurrected and comprise his latest release.

The two performances are distinct. The first, with a full band, concentrates on his then new album Full Service, No Waiting. The second is more laid back and intimate with only violinist/background vocalist David Perales in support. It is more of a career spanning effort.

Full Service, No Waiting may be the best album of his career. and two decades later it is interesting to hear his original live-take on the music. The original album was a folk-rock masterpiece and while it is a little more rock oriented here, the melodies and incisive lyrics are still powerful. The first five tracks duplicate the original release and remain one of the best introductions to his solo career.

The second half of the album is more restrained and intimate. Songs such as “Leaving Home,” “Pay Day,” “Beyond The Blues,” and “Coulda Shoulda Woulda” are stripped down to basics.

On The Way Downtown: Recorded Live On Folkscene is an excellent peak into the music and mind of Peter Case 20 years ago. An excellent look at a sometimes under appreciated artist.

Christmas With Elvis And The Royal Philharmonic

You better watch out, you better not cry, better not pout, I’m telling you why, Elvis Presley is coming to town (again).

Christmas is less than three months away and another batch of Elvis Presley music has been re-imagined. The latest in the Elvis sweepstakes is 13 of his Christmas tunes, now being backed by the Royal Philharmonic Orchestra.

Elvis Presley’s three Christmas albums have sold a combined 24,000,000 copies and his original 1950’s Christmas album remains his biggest selling album. The original release is one of the better Christmas releases in that it combines rock, sacred, and gospel with some gritty and in several cases bluesy vocals by the king. It is just about the perfect Christmas album.

As Jim Croce wrote, “And you don’t tug on Superman’s cape, you don’t spit into the wind, you don’t pull the mask off the old Lone Ranger,” and you don’t mess around with the perfect Christmas album.

In many ways the background orchestra takes away from the power of Elvis’ vocals. When the orchestra is reduced to the distant background and the vocals are more upfront, it is just a better listen such as “Merry Christmas Baby.”

If you have not heard or want to obtain some of Elvis’ Christmas music, seek out a copy of his original first album. It is readily available. If you are an Elvis fan who has to have everything, then go ahead.