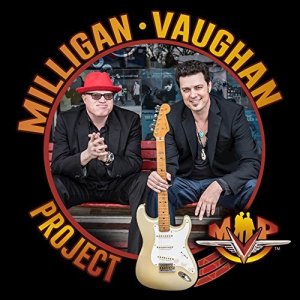 It all starts in Texas, at least for the Milligan Vaughan Project. Vocalist Malford Milligan and guitarist Tyrone Vaughan are Texans to their core and their joining together serves up a helping of dynamic rock and blues with their debut album MVP..

Milligan has a soulful voice and when it joins together with Vaughan’s guitar work, the sound emerges as a fusion of rock and blues.

The album was recorded in the studio except for the last two live tracks. “What Passes For Love” and the classic Freddy King song “Palace Of The King” represent the heart of their sound, which has been honed by constant touring.

They travel in a different direction with the ballad “Here I Am,” which is a nice counterpoint to their usual upfront, in your face approach.

MVP is a fine debit album from two music veterans who compliment each other well. Recommended for anypne who likes their modern days blues powerful and Texas style.