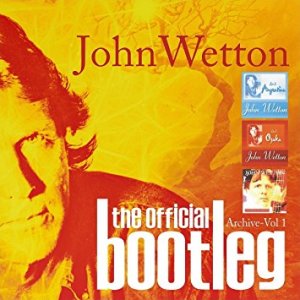 John Wetton is best known as the lead singer and bassist of Asia. He was also an important member of UK and the Red-era of King Crimson. More under the radar has been his solo career. That fact  has now somewhat been rectified with the release of a 6-CD Box set titled The Official Bootleg.

Much of the material has been previously released but has been out of print for at least a decade. Now they returns in a re-mastered form, which has greaty improved the sound quality.

The Box Set revolves around a series of live concerts from the late 1990’s. Live In Argentina 1996, Live In Osaka 1997, and Live At The Sun Plaza Tokyo 1999 contain a total of 55 tracks. There is an overlap of the material as a number of songs are repeated. Still, the material covers most of his career; from his most popular songs with Asia, “Heat Of The Moment” and “Only Time Will Tell” to some of his lesser know creations such as “The Smile Left Your Eyes,” “In The Dead of The Night,” “Caught In The Crossfire,” and “Book Of Saturday.”

The band has a changing set of basic characters but it is drums, guitar, and keyboards to back is bass and vocals. His solo style is more laid back and simple than his best known work. It puts more emphasis on the lyrics than the sonic textures of the music.

This is the type of release that will appeal to his fan base but may not garner broad commercial appeal. He was a musician who was a part of one of the most commercially successful bands of its era and another who creatively extended the parameters of rock music. While his solo music is somewhere in-between the two, it is a satisfying experience if you are so inclined.