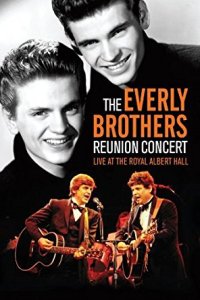 The Everly Brothers are one of the most successful duos in American music history. From 1957-1964 they placed 36 songs on the American singles charts, including such Number One hits as “Wake Up Little Susie,” “Bird Dog,” “All I Have To Do Is Dream,” and “Cathy’s Clown” along with “Bye Bye Love” and “Problems,” both of which reached Number Two.

They were known for their tight harmonies as Don sang the lower parts and Phil the higher vocals. Many groups cite them as a career influence from The Beatles and the Bee Gees to the Beach Boys and Simon & Garfunkel. They were one of the early inductees into the Rock And Roll Hall Of Fame, having entered in 1986.

As the sixties drew to a close the hits stopped coming and while they would perform together until 1973 their popularity soon waned. From 1973-1983 they went their separate ways and rarely spoke to one another. While their solo careers found moderate success, they faded from the public consciousness especially in the United States.

Their comeback began at the Royal Albert Hall in London on September 23, 1983, when they reunited for their first concert together in over a decade. That concert was released as a two-disc vinyl LP and reignited their career as a duo. That famous performance has now been released as a DVD titled Reunion Concert: Live At Royal Albert Hall.

This DVD will be a revelation to anyone not familiar with the Everly Brothers. Picking up where they left off ten years before, their voices, at ages 46 and 44, were still able to create the famous harmonies which made them famous.

Their backing band included British guitarist deluxe Albert Lee (who was also the musical director for the concert), pianist Pete Wingfield, plus three members of Cliff Richard’s touring band: drummer Graham Jarvis, bassist Mark Griffiths, and pedal steel guitarist Martin Jenner. Albert Lee, in particular, is one of the underrated guitarists in rock music and his solos on “Bye Bye Love” and “Be-Bop-A Lula” are phenomenal.

Except for “Problems,” all aforementioned songs were part of their 23 song set. Also performed that evening were “Crying In The Rain,” “Cathy’s Clown,” “When Will I Be Loved,” “(‘Til) I Kissed You,” “Lucille,” and a wonderful medley of “Devoted To You/Ebony Eyes/Love Hurts.”

The Everly Brothers reunion would be permanent and they  performed together until Phil became ill in 2011. He passed away two years ago. Reunion Concert: Live At Royal Albert Hall remains the best live document of their storied career.