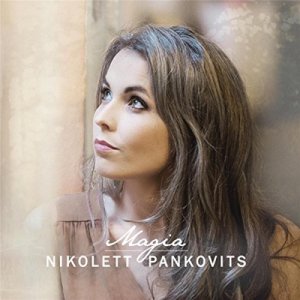 Nikolett Pankovits was born in Hungary, acted in 22 movies, was jailed during the war in her country, escaped to Brazil, settled in New York, and immersed herself in Latin music and rhythms. She has now released a new album titled Magia.

Her music can best be described as a fusion of roots and jazz that does not confine itself to one country. She draws on the music and stories of her home country and South America, and combines them with an American jazz feel.  She is backed by guitarist Juancho Herrera, violinist Zach Brock, trumpeter Josh Deutsch, pianist Jason Lindner, bassist John Benitez, and drummer Ferenc Nemeth.

The uniting theme of the album are the stories that are told through her vocal interpretations. There are torch songs from Hungary that provide a history lesson, a childhood song “La Dama De L Muerte,” which is transformed into a Mexican Day Of The Dead Celebration complete with new Spanish lyrics, more traditional jazz excursions with “Gloomy Sunday” and “Besame Mucho,” and a soaring album ending Alan and Marilyn Bergman composition “Where Do You Start” backed only by a piano and saxophone.

Nikolett has released and interesting album that takes the listener in a number of directions It is music worth exploring.