The Acoustic Blues And Roots Of Duke Robillard

Duke Robillard’s career as one of America’s preeminent blues guitarists is near the five decade mark and so it is a long overdue and welcome surprise that he has issued an acoustic album.

The Acoustic Blues & Roots Of Duke Robillard is an affair of the heart as he reaches back into American music history for many of the songs that had a profound influence on his development as a musician. Country, early blues tunes, and Americana all make appearances in this varied but ultimately satisfying release.

He reaches back to one of the master songwriters of the 19th century for the album’s first track. Stephen Foster’s “My Old Kentucky Home” is reworked into a delicate and distinct modern translation and sets the tone for what will follow.

A couple of country icons provide material for two of the better tracks. Jimmie Rodger’s “Jimmie’s Texas Blues” and Hank Williams “Let’s Turn Back The Years” provide fodder for his exploration of the connections of early country music and the blues. The Williams tune was one of the simplest of his career and Robillard wisely remains loyal to the original intent.

Every so often Maria Muldaur reappears on the music scene and here she provides the vocal for the 1920’s Christmas song “Santa Claus Blues.” While it first appeared on a blues Christmas compilation album, it now finds a permanent home.

A number of his own compositions are interspersed among the cover songs. “I Miss My Baby In My Arms,” I’m Gonna Buy Me A Dog (To Take The Place Of You),” and “Backyard Paradise” provide a nice counterpoint to the rest of the material, yet do not feel out of place.

Through it all Robillard plays a variety of stringed instruments. The liner notes wisely let him explain each tune and what instruments are being used.

The Acoustic Blues & Roots of Duke Robillard brings a lot of eternal music into the 21st century. One of the better and more focused releases of his career.

John David Souther’s, (or JD Souther if you prefer), name appears on dozens and probably hundreds of albums, usually as a songwriter. Best known for co-writing such Eagles classics as “Best Of My Love,” “New Kid In Town,” and “Heartache Tonight,” his compositions have been recorded by a variety of musicians such as Hugh Masekela,, Brooks & Dunn, Raul Malo, Trisha Yearwood, Dixie Chicks,, Bonnie Raitt, and particularly Linda Ronstadt who has recorded ten of his compositions.

His solo albums have never brought him the commercial success he has achieved as a songwriter. Nevertheless his albums are well-crafted and polished pop. He has a fine voice and while it may not be as distinctive as that of James Taylor, it is close.

Black Rose, released in 1976 was his second solo album. He had just finished a stint as part of the Souther-Hillman-Furay Band and incorporates some of their country rock influences into his smooth pop approach. He also called in a number of favors as David Crosby, Kenny Edwards, Glenn Frey, Art Garfunkel, Lowell George, Andrew Gold, Don Henley, Linda Ronstadt, and Don Henley all contribute their talents to the album.

Two songs that are now connected to Ronstadt are highlights. His “Simple Man Simple Dream” is a simple presentation of a song Ronstadt would take to another level. “Faithless Love” is a delicate song of loss that is enhanced by his laid-back vocal.

“Midnight Prowl” tells a dark tale that is emblematic of the story songs that inhabit the album. “Banging My Head Against The Moon,” “Your Turn Now,” “Baby Come Home,” and the enigmatic title song are all examples of his wonderful way with words that led to his induction into the Songwriters Hall Of Fame.

The best of the seven bonus tracks is a live version of “Faithless Love” recorded when he was the opening act for the Eagles and Lowell George’s slightly weird “Cheek To Cheek.”

Black Rose is a consummate singer/songwriter album from a bygone era. It has a nice smooth pace and remains one the highlights of his career.

Not many rockers have a day job as a Sport Talk Radio Show in the U.K. His night job is as the drummer in the Kiss tribute band Dressed To Kill. Now Ian Danter has stepped forward to release his second album Second Time Around.

Danter does not change the course of rock music; but rather creates solid and melodic classic rock. He is a talented songwriter who explores such topics as fame, religion, and money, often from a witty view point.

It is an album of energy, riffs, and rock and roll. You may have heard this type of music before but he covers the ground well. 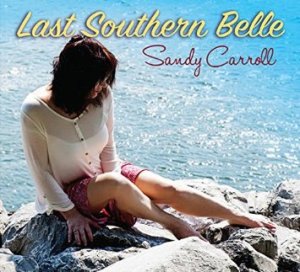 I became a fan of Sandy Carroll about five years ago with her release of Just As I Am. It continued with 2013’s Unnaturally Blonde. Now it is has been solidified with her new release Last Southern Belle.

Her new album is a personal album that explores her journey away from the expectations of trying to be a southern belle. Her lyrics are deeply influenced by her formative years growing up in the south. The themes of hope, loss, maturation, and even a little humor add up to an intimate and powerful release.

The best three tracks grew out of her return to the area of her childhood and provide a fitting end to the album. “The Boys Of Shiloh” is a poignant look at the emotions surrounding the Civil War battlefield. “Hallelujah Hill” is right out of a southern gospel revival meeting. “Water Run Deep” is a warning about the past.

Sandy Carroll is a singer/songwriter who has found her creative groove. Last Southern Belle is another link in that chain.