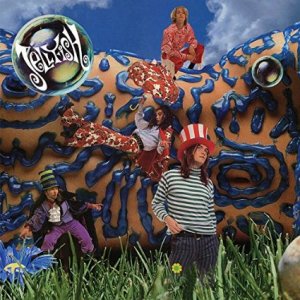 Jellyfish is a band whose existence and time in the studio was all too short.  Active from 1990-1994, they only issued two studio albums before dissolving.  Both albums have now been reissued in an expanded form.

Drummer/vocalist Andy Sturmer and keyboardist/vocalist Roger Joseph Manning Jr. were the two constants in Jellyfish.  Joining them were guitarist Jason Faulkner and on tour bassist Chris Manning. They issued their debut album, Bellybutton, in 1990.

The original release contained 10 tracks. Now they have been enhanced by a ten song live set and a second disc of 16 demo tracks. The booklet contains a history of the group and track by track commentary by the band members.

Jellyfish can best be described as a psychedelic power pop group, who moved in a number of creative directions, but through it all runs a melodic and harmonic approach.

“That Is Why” is a fine example of their ability to integrate harmonies into their music. “The King Is Half-Undressed” is an off-kilter song that combines pop and a west coast psychedelic sound. “I Wanna Stay Home” and “She Still Loves Him” are laid back pieces of mainstream pop. “Baby’s Coming Back” has a light bubblegum sound.

While the ten original tracks are very good, the live set is better. Many groups cannot reproduce their studio sound in concert but Jellyfish takes such tracks as “Sugar And Spice,” “All I Want Is Everything,” “Jet,” and “Mr. Late” to pop heaven.

The 16 track second disc of demos is a mixed affair as the tracks were not considered finished enough to officially release at the time. If you are a fan and want everything by the band or want to see how a pop song evolves, then the disc is a nice addition to the package.

Jellyfish was a short lived unit but left behind some of the better pop music of the early 1990’s. Bellybutton not only contains good music but is a clever album on many levels.