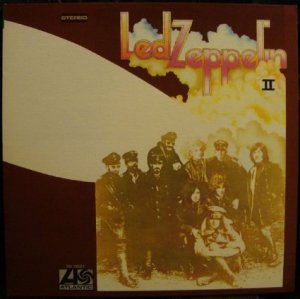 Led Zeppelin II has been honored as one of the most critically acclaimed, commercially successful, and influential albums in rock history. It cemented Led Zeppelin’s status as one of the top-ranked, most-famous bands of all time, reaching Number One on music charts around the world. The album has sold 12 million copies in the United States alone.

What was remarkable was the band was touring in support of their debut album so the writing and much of the initial recording was done piecemeal. In many ways this may have helped the process as Jimmy Page and the rest of the band learned more as they performed. What emerged was a tighter, heavier, and more-polished release than their first yet it remained true to (and expanded upon) Page’s musical vision.

An integral part of the album’s success was Page’s direction and production. The songs fit together like a puzzle and even over forty years later I have trouble listening to them out of their original context. Maybe the sound could have been a little clearer but that has only become noticeable as time has passed.

“Whole Lotta Love” has become an accepted part of the musical landscape but when it was released in 1969 it was groundbreaking. I was in college at the time and had never heard anything like it, and the song still mesmerizes me today. It just explodes out of the speakers and those guitar bursts are some of the most memorable ever played. The song also became the band’s only Top Ten single in the United States, reaching number four on the charts.

I almost wore out “The Lemon Song” on my original vinyl copy of the album. I would continually lift the tone arm and move it back to play the song over and over again. The sexual innuendo, Robert Plant’s seemingly improvisational singing, and Page’s guitar make it one of the heaviest blues/rock tunes ever recorded.

There are really no weak tracks on this one. “Heartbreaker” has Page’s rapid-fire guitar runs. It is rare to describe a Led Zeppelin song as beautiful but “Thank You,” with John Paul Jones’ keyboards and Plant’s soulful voice, comes close to meeting that description. “Moby Dick” features a two-minute John Bonham drum solo that will leave you exhausted. “Living Loving Maid” even manages to be melodic in the midst of the guitar mayhem.

Led Zeppelin II is 42 minutes of rock history, an essential listening experience that should not be missed.