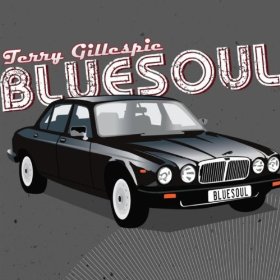 Terry Gillespie is a blue collar musician who brings a no-nonsense approach to his music. He has played countless live dates, both as a solo artist and as a members of Heaven’s Radio, and has spent hundreds of hours in the recording studio, all without overwhelming commercial success, yet he continues to produce music that satisfies himself.

He honed his craft as a roots artist but his latest release takes him in a blues direction. Bluesoul may incorporate elements of jazz, roots music, and reggae but it is grounded in the blues.

and then under went some over dubbing in the recording studio. While not a live album in the pure sense of the word, it is about as close as you can get as basically what they played is what you hear. The basic band is guitarist/vocalist Gillespie, keyboardist Peter Measroch, bassist/violinist  Lyndell Montgomery, and drummer Wayne Stoute.

“What Would Bo Diddley Do” is a fine example or electric blues. “My Tipitina” travels is a soulful direction with a blast of horns added. “You’re Gonna Hear Me Cry” is a slow percolating blues song. “Let’s Get Together” contains a precise guitar performance by Gillespie on which every note is clear.

Terry Gillespie has practiced his craft for decades. Bluesoul is the present day culmination of that process and is worth a listen.