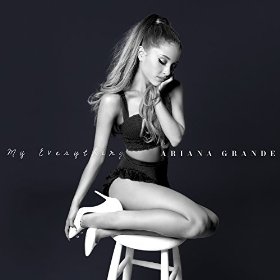 Well, let’s see ….. Ariana Grade is 21 years old. She has been in two Broadway plays, starred in two successful Nickelodeon television series, Victorious and Sam And Cat, her 2013 debut album Yours Truly reached number one, and so far this years she has had three top ten singles. With all that in mind, it is probably a safe bet to assume that her just released second album, My Everything, will be a huge commercial success.

Grande has one of those voices that is a gift. It has a natural soulful quality and a range that most singers can only envy. Even as a secondary character and singer to Victoria Justice on the hit series, it was immediately recognizable.

She is now recognized as one of the leading lights of the newest pop generation and based on sales, she is a future diva in waiting.

While she continues to evolve, she also has released an adult album of sophisticated and excellent modern day pop. My only real criticism of the album is her use or overuse of guest rappers, who appear on eight tracks. Taken individually, such guest artists as Iggy Azalea, Big Sean, and others fit in well but when taken together, it is a little overwhelming and a bit repetitive. Also, she has a voice that demands to be heard and hopefully in the future, she will just unleash it on song after song. That aside, overall the music has a cohesive feel and the changing tempos and styles will entertain and keep the listeners attention.

The basic album is anchored by her two hit singles “Break Free” and “Problem” and if you go with the deluxe version of the album, you receive her other hit, “Bang Bang.” “Problem” has been in the top ten for well over a month and represents all that is good about pop music. The rap intertwines with Grande’s vocal and the sax provides just the right breaks.

The track that jumps off the album is “Love Me Harder.” It is very grown-up and may look toward her future.

My Everything finds Ariana Grande taking another successful step forward on the road to continuing stardom. It is an album that will appeal to her fan base and no doubt expand it as well.