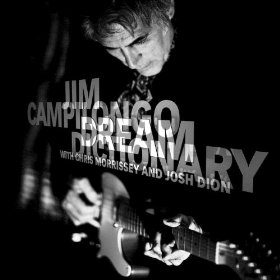 Jim Campilongo has been releasing albums for close to a decade.  He is now recognized as one of the better and most creative guitarists on the music scene today. His latest album, Dream Dictionary, will be released January 21st.

He is usually known for his aggressive style but moves in a very different direction with his latest release. It is a very laid back affair. Backed by drummer Josh Dion and bassist Chris Morrissey, he settles into a grove but there is little fire as on many of his previous albums.

He is at his best when he explores melodies with such tracks as “Heaven Is Creepy” and the title tune. On the other hand, songs such as “Suppose” and “Tony Mason” find him doodling with little sense of direction. Another issue is the bass, which is turned up to loud on a number of the tracks, which detracts from his guitar playing.

Jim Campilongo has consistently demonstrated that he is an expert guitarist. Unfortunately Dream Dictionary does not live up to that accolade. If you want to explore his music, there are a number of better starting points.