Creedence Clearwater, John Fogerty, Wrote A Song For Everyone 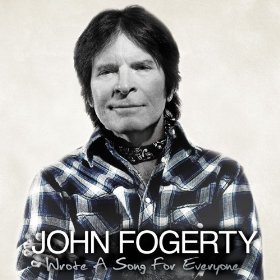 Wrote A Song For Everyone

I have to admit that I am not the biggest fan of duet albums. Some are recorded because an artists career is in commercial decline and others because there is a lack of new creativity. Happily that doe not seem to be the case for John Fogerty.

When putting together a duet album, John Fogerty has one thing going for him that most artists do not, and that is a catalogue of some of the best songs in music history. The Hall Of Fame career of Creedence Clearwater is built upon his compositions.

He has wisely chosen vocal partners who take most of the songs in different directions.

A number of the tracks have a decidedly country bent. “Almost Saturday Night” with Keith Urban replaces much of the lead guitar sound with a banjo. His union on “Hot Rod Heart” with Brad Paisley is a nice chugging road song. Alan Jackson helps to move “Have You Ever Seen The Rain” out of a rock format. The title track benefits from the female voice of Miranda Lambert and guitar of Tom Morello. “Bad Moon Rising” with The Zac Brown Band emerges as a peppy old fashioned hootenanny performance.

There are a number of songs that retain their rock and roll roots. “Fortunate Son” is a song that has always had an edge to it but The Foo Fighters help to make it downright nasty. Bob Seger’s voice may not be as strong as it once was but they manage to make “Who’ll Stop The Rain” authentic. The best track may be the somewhat obscure “Someday Never Comes” with Dawes who help it achieve a rare beauty.

The album contains two new solo tracks. “Mystic Highway” comes close to some of his classic material as it is a melodic pop/rocker. “Train Of Fools” is close to it in quality and is a straight ahead rocker.

Yes, there are a couple of misses. “Born On The Bayou” with Kid Rock is just to vocally quirky. Jennifer Hudson gives a fine performance on “Bad Moon Rising” but it is a rock song and her gospel leanings are difficult to take.

All in all, John Fogerty has issued both an entertaining and an interesting album of music and that is a difficult combination to beat.